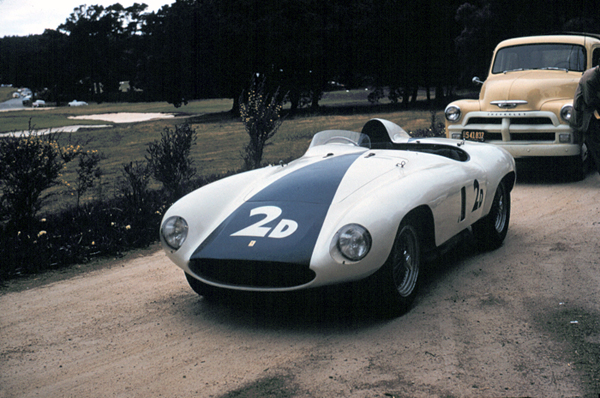 This car is Allen Guiberson’s new Ferrari 750 Monza (0510M) shown next to the Pebble Beach Golf Course just before it was to be driven by Phil Hill at the 1955 Pebble Beach Road Races which took place on April 17, 1955. Guiberson had taken delivery of this pretty Monza in time for the 1955 Sebring 12 Hours a month before. At Sebring the Monza was initially awarded  first overall, but then a back and forth lap-counting protest gave the winning result to Briggs Cunningham’s Jaguar D-Type driven by Mike Hawthorn and Phil Walters. So the Monza’s drivers, Phil Hill and Carroll Shelby, had to settle for second place at Sebring but still captured first on the race’s Index of Performance.

Here at Pebble Beach, Phil Hill ran away from the field to win the Del Monte Trophy ahead of an earlier ex-Scuderia Ferrari, ex-Alfonso de Portago 750 Sport driven by Sterling Edwards. Phil Hill had also won Best in Show at the weekend’s Pebble Beach Concours with his 1931 Pierce Arrow LeBaron Cabriolet.

Guiberson never used the Monza again, giving more attention to his older but more powerful Ferrari, a 340MM Vignale spider. So the Monza sat unused in Guiberson’s garage until it was seen by two young men from Dallas, Dick Hall and his younger brother Jim, the latter becoming the more famous of the two, both as a driver and later on as the constructor of the Chaparrals. The Halls were not lacking for family money and, in addition to buying the Monza from Guiberson, helped Carroll Shelby set up shop in Dallas. Shelby went racing again in the Monza in 1956 until Jim Hall came back from CalTech and took over the driving duties.

Today, the ex-Guiberson Ferrari Monza remains in the Petroleum Museum in Midland, Texas, returned to its original white and blue livery, the only Ferrari 750 Monza that was until recently owned by a driver who had raced the same car in the 1950s. It was sold to a new owner at Monterey, California in August 2016.

← The Brickyard Winner
A BMW Foray →
Join 2,508 other followers