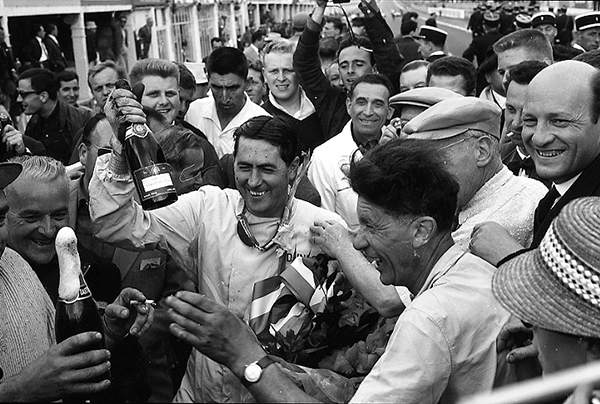 This victory celebration, with Jack Brabham in the midst of his mechanics and well-wishers, is taking place in the pit lane of the Reims Grand Prix circuit on July 3, 1960. The pit lane at Reims was then very narrow, as it remains on this ancient circuit today, with no separation from the slightly downhill main straight which can be seen in the background. Brabham drove a Cooper 53 with a 2.5 liter Climax FPF motor.

Practice was all Brabham, as he was fastest by almost 1.5 seconds from Phil Hill’s 246F1 Ferrari Dino. This showed that the days of the front-engined grand prix cars were truly over, even given the more powerful Ferrari motor on a super-fast circuit. This point also was underlined by this race being the final appearance of Lance Reventlow’s Scarabs. The Scarab was a lovely example of too little, too late with both cars using up their motors in practice and failing to start. Stirling Moss was also a non-starter as he was recovering from broken legs due to his frightening practice crash at the Belgian Grand Prix at Spa-Francorchamps due to suspension failure of his Lotus two weeks before.

The start had seen a possible disaster when the flag dropped with Graham Hill not yet able to select first gear in his B.R.M. and a few collisions resulted with two retirements but no one injured. The race would be over 50 laps and the first half had seen a very close race between Brabham’s Cooper and the two Ferraris of Phil Hill and Wolfgang von Trips, sometimes separated by nothing at all. However. a few laps later it was all over with the three Ferraris, the third driven by Willie Mairesse, retiring with broken transmissions. Brabham was now safe and the competition turned to the race for second place between Brabham’s teammate Bruce McLaren and Olivier Gendebien in an older Yeoman Credit Cooper. At the end Brabham cruised home with a margin of some 48 seconds ahead of Gendebien after McLaren had outbraked himself on the final lap in an attempt to pass Gendebien.

Brabham, who already had won in Holland and Belgium, now added France and would achieve two more wins over the following four races to sew up the Championship with McLaren in second place.

← A Man of Tragedy
A Tiger in His Tank →