A Tiger in His Tank

Jack Brabham stands on the podium at Le Mans, having just won the French Grand Prix on July 2, 1967 holding with his sponsoring Esso Tiger and a magnum of Moët & Chandon champagne. In 1967 the French GP was held on the “Bugatti Circuit” at Le Mans, a rather uninteresting and much-shortened version of the circuit used for the famous 24 hour race. Most drivers would have far preferred using the full Le Mans circuit and the lack of spectators for the Grand Prix made it the only occasion this race was held at Le Mans in modern times. The Bugatti Circuit was about 4.4 km. in length, had been created for a racing school and wound some of its way through former parking lots. Some wags referred to putting the famous French Grand Prix at this bring location as being the Grand Prix of Car Parks! 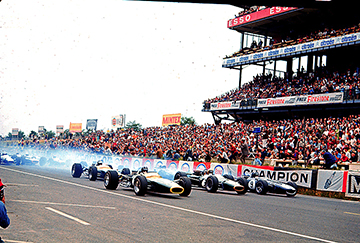 Hill led from the start but eventually he was joined and then passed by Clark and the two Lotus 49s began to open a significant lead over Brabham, Gurney and Amon who had the lone Ferrari 312 in the race. But the good fortune for Lotus was short-lived as first Hill and eventually Clark both retired with failure of their ZF final drive mechanicals.

finish by almost 50 secs. The all new Repco motors in the Brabham’s, no longer based on GM’s Oldmobile alloy V8, proved effective and reliable. Over the remaining races Brabham and Hulme would continue to come in first and second most of the time, swapping places from race to race, which left Hulme to win the Championship by three points from his Australian team leader.