This photograph was taken at Zandvoort located in the seafront dunes of Holland during the Prijs von Zandvoort on August 15, 1954. The driver is Herman Roosdorp, a Dutch driver resident in Antwerp Belgium, and his car is an early customer Ferrari 500 Mondial n. 0434MD. The 500 Mondials had a two liter four cylinder motor designed by Aurelio Lampredi, based on his similar design which had powered the Ferrari 500F2 cars with which Alberto Ascari won the World Championship in 1952 and 1953. Roosdorp’s Ferrari was the first private Ferrari to see racing use in Holland.

The 500 Mondial was brought into being by the modification as a prototype of an early four-cylinder Ferrari 625TF in 1953 which became the Scuderia’s two liter flag carrier. It was a much lighter and more competitive car than the customer versions which came along in 1954, designed to carry both two liter and three liter versions of Lampredi’s four cylinder motor. In 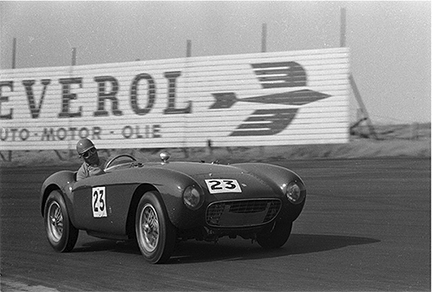 all, there were 19 500 Mondials built and a further six three liter versions using the same type 501 chassis. Of the 19 500 Mondials, 14 were bodied by Pinin Farina (as the firm was then called) and four by Scaglietti. The Farina versions were initially bodied  as was Roosdorp’s 0434MD (above and left) in a style similar to that Pinin Farina used for the larger Ferrari 375MM. With a two liter motor top speed was found somewhat limited by the car’s rather “square” body shape and the final five Pinin Farina versions adopted a more streamlined nose profile, similar to what Sergio Scaglietti would offer on his cars which were based on the prototype’s slipperier shape.

Recent historical analysis indicates that the Roosdorp car had actually been restamped, replacing an earlier chassis number, before being sold to its Dutch owner. This Mondial was delivered to Roosdorp through Jacques Swaters’ Garage Francorchamps in Brussels one May 17, 1954 and its new owner raced it at least three times, once at Spa-Francorchamps and twice at Zandvoort before the race at Zandvoort in August.

After the 1954 season Roosdorp returned his Mondial for updating at Ferrari’s Assistenza at Modena and it was then resold to another Dutch owner. After disappearing for some period of time, this quite well-restored Mondial spent many years in American collections.

← A Yellow Helmet
The First SWB →