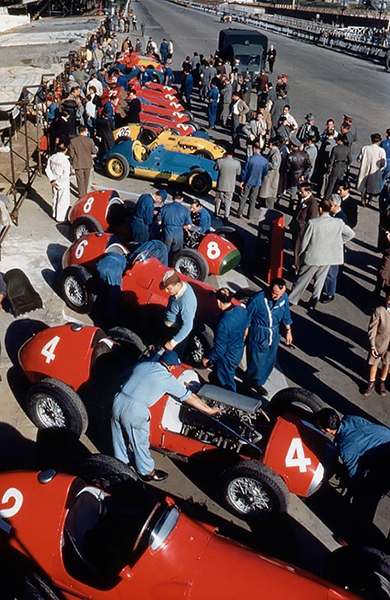 In the early 1950s color motor racing photography was quite rare, primarily because motoring publishers of both books and magazines were unwilling to undertake the expense and difficulties then involved in printing color images. One well-known motor racing photographer of that time said, “Every photo I took in color was one I might have sold if it were in black and white.”

Here is a lovely color image of the lineup on the main straight before the Spanish Grand Prix which was held on a street circuit in Barcelona on October 28, 1951. The Pederalbes Circuit, also sometimes called the Penya Rhin Circuit after the race of that name held here, used the long Avenida del Generalismo Franco as its start/finish area which we see on the left.

Closest to the camera are the red 375F1 cars of the Scuderia Ferrari, which will be driven by Alberto Ascari (n. 2), his close friend Luigi Villoresi (n. 4), José Froilán González (n. 6) and Piero Taruffi (n. 8).

Further on is the blue and yellow Maserati 4CLT/48 with a V12 OSCA motor sporting the colors of Siam which will be driven by Prince Bira. Then comes the yellow Talbot T26C with a Tony Lago 4.5 liter 6-cylinder motor driven by the Belgian Johnny Claes.

The red cars after the Talbot are the four cars of Alfa Corse, the works Alfa Romeo team, here for their last Grand Prix before the new Formula 2 which will be the 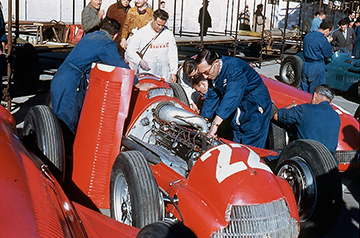 Championship category for 1952. And here on the left are the Championship-winning Alfa Romeo 159s with their 1.5 liter straight 8-cylinder motors with twin-stage supercharging. N. 22 will be driven by Juan Manuel Fangio who qualified second to Ascari’s 4.5 liter V12 Ferrari.

It would be an exciting last Grand Prix of the year as Fangio led Ascari by just two points in the World Championship standings. The race lived up to its billing, but Ferrari found themselves in tire trouble which gave the victory and the Championship to Fangio, winning some 54 seconds ahead of González, as Ascari came in fourth, delayed both by an extra pit stop and having to back off from his blistering pace to preserve his tires. However, the next two years would give Ascari all he could hope for.

Photos from the Archivio Corrado Millanta ©The Klemantaski Collection – http://www.klemcoll.com