The Maserati Team at Sebring 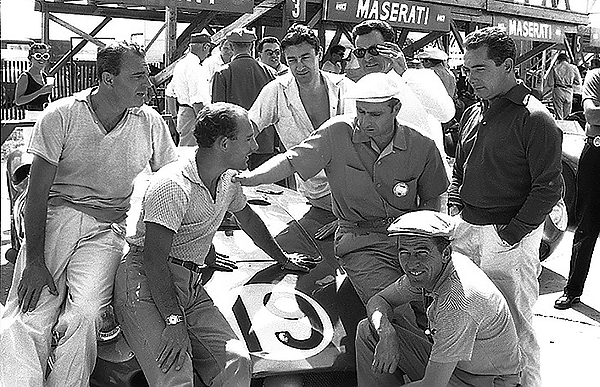 Here we are at Sebring on March 22, 1957 during practice for the 12 hour endurance race. The Maserati team drivers are surrounding the Maserati 450S which will be both on pole and the winning car.

On the left is Harry Schell who will drive a Maserati 300S to second overall with Stirling Moss who is siting on the car’s nose just to Schell’s left. Across the car from Moss is Juan Manuel Fangio, the team leader, who will drive this winning Maserati 450S with Jean Behra who is standing to the right in the dark jacket. Standing behind the others with his shirt front open is Roy Salvadori who will drive a four cylinder Maserati 250S with Carroll Shelby who is squatting in front of the group. The Salvadori/Shelby car will be disqualified for an illegal refueling when they broke the 20 lap minimum distance.

1957 was the year of unlimited sports-racing cars. Maserati had created the new 450S with its very powerful  4.5 liter four camshaft V8 motor. Ferrari was running its 315S with a V12 four camshaft motor of 3.8 liters which would soon be enlarged further to 4.1 liters. Perhaps of the most interest at Sebring was the new beautiful lightweight Corvette SS which was to be driven by John Fitch and Piero Taruffi. Once shaken down, which had not yet happened but Sebring would shake it into an early retirement, it would have been competitive as both Moss and Fangio used a practice version to get close to the qualifying time of the Fangio/Behra 450S.

For once the Maseratis held together over the tough and bumpy Sebring course with its challenge to drum-braked cars. Here are the three team cars in the pits before the start.

Juan Fangio, surrounded by the photographers going our for a final test in the Maserati 450S which he had called a “Bazooka” for its rocket-like acceleration. The bodies of the new Maseratis were done by Medardo Fantuzzi in Modena.

Stirling Moss has a final look around the Maserati 300S he will drive with Harry Schell. They will finish second overall. 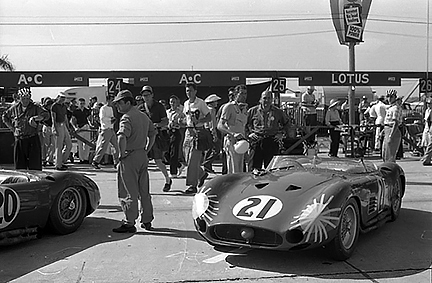 Carroll Shelby stands beside his Maserati 250S, looking very much like a 300S, but with a 2.5 liter motor. Roy Salvadori, available because Aston Martin did not enter at Sebring will be his co-driver. Unfortunately, they were called in too early to refuel, due probably to poor lap chart keeping , and were disqualified.

Photos from the JJF Archive ©The Klemantaski Collection – http://www.klemcoll.com