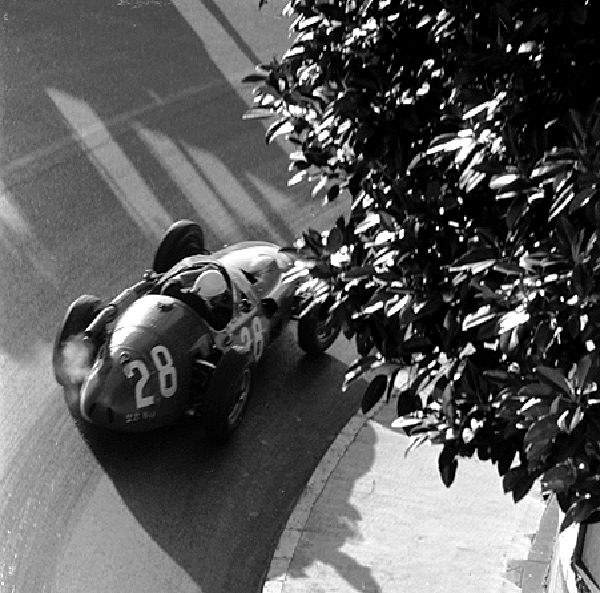 For the Monaco Grand Prix on May 13, 1956, Klemantaski had arranged an upstairs room on the front facade of the Hotel Mirabeau which was situated at the sharp right hand bend of the same name. For the early morning Saturday practice Klemantaski sat on his balcony with a cup of coffee taking a series of photographs looking down at cars rounding Mirabeau. Here is Stirling Moss in a works Maserati as he accelerates out of Mirabeau and into the short downhill straight to the Station Hairpin.

Because the chicane after the tunnel had been tightened to slow the cars – memories of Ascari’s “bath” the year before being in the organizers’ minds – Juan Fangio’s lap record was not threatened. Nevertheless, Fangio was still the fastest qualifier, followed at six tenths by the Maserati of Moss with Castellotti’s Ferrari-Lancia at another three tenths. The starting field would be limited to 16 cars due to the two mile street circuit length. However, the BRM team departed with their two cars after a terrible practice, Maserati withdrew Louis Chiron’s entry after he had over-reved and blown up two motors in practice and Giorgio Scarlatti withdrew his old two liter Ferrari so the starters were reduced by this pre- race attrition to 14. 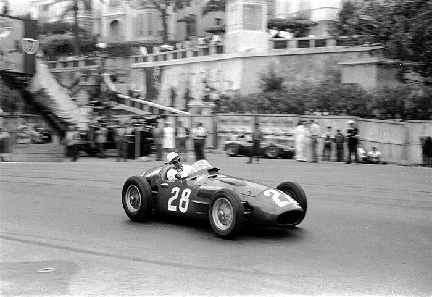 At the start it was not Fangio in front but Moss who established a lead that he would never give up. Here he is at the bottom of the Ste. Devote hill. Peter Collins seemed to be the best of the Ferrari-Lancias and circulated in second place. Fangio had come back and taken over second place but soon damaged a rear wheel against a harder object and came into the pits. The semi-wreck was given to Castellotti who had already retired his car.

Then Fangiio took over Collins’ car which left that car in third place, behind the Maseratis of Moss and Jean Behra. Fangio then got past Behra and took off after Moss who was about 30 seconds ahead. But Moss had the race under control and won by 6.1 seconds.

← Fangio at Bremgarten
What a Difference a Year Makes →