The Start of a Competitive Life

We are at the fueling point behind the pits at the famous Nürburgring on August 29, 1953 before practice for the next day’s 1000 Km. race. The car is a Ferrari 375MM with a 4.5 liter V12 motor and the latest Vignale spyder bodywork. It will be driven for Scuderia Ferrari by two of their front line drivers, World Champion Alberto Ascari and his teammate and 1950 World Champion Giuseppe “Nino” Farina.

Ferrari had brought three of these cars, but two were withdrawn after practice, one providing a replacement motor for the Ascari/Farina car above. The only competition was from Scuderia Lancia which had brought two of its advanced D24s and an older D20. Juan Fangio, Piero Taruffi and Eugenio Castellotti were among their drivers but none of them would get past the halfway point before having to retire. The other potential competition was two Jaguar C-Types entered by Ecurie Ecosse. 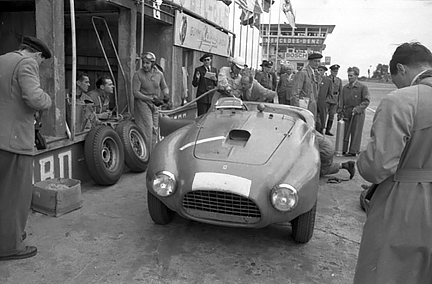 Ascari took the start and initially ran behind Fangio’s Lancia, but that challenge soon faded leaving the Ferrari with a commanding position and no need to press on hard. Here at the left is a pit stop for the leading Ferrari with Ascari standing to the left of the car as Farina refuels under the careful watch of a pit steward while mechanics change the rear wheels. Ascari and Farina easily won the race with a Jaguar C-Type in second place some 15 minutes behind.

Their Ferrari 375MM would eventually be sold on to Luigi Chinetti in America who used it to terrify Alfonso de Portago who rode with him in the 1953 Carrera Panamericana Mexico where they were disqualified due to being too late on the second day’s run as they had had engine troubles. Chinetti then sold the 375MM to Allen Guiberson in Dallas who had it further modified with a headrest and tail fin behind the driver. In this form it was raced by Phil Hill and Richie Ginther in the 1954 Carrera Panamericana, finishing second overall. It was then raced several times for Guiberson by Carroll Shelby. Later on it was restored for an American owner.

To see more of our photographs including additions from our JJF and Corrado Millanta archives please go to: http://www.klemcoll.com/TheGallery.aspx