The Kings of Formula 2 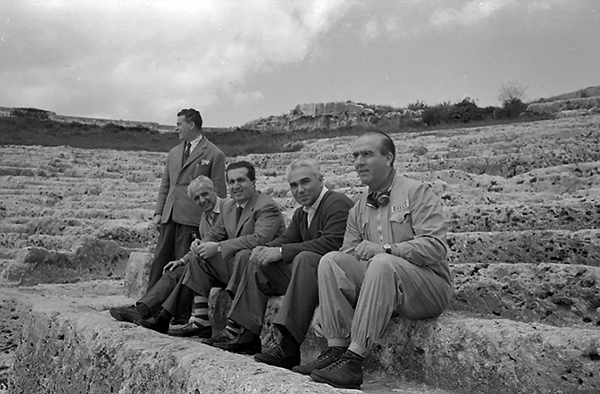 We are in Syracusa on the south portion of the east coast of the island of Sicily on March 15 1952, the day before the Syracuse Grand Prix for Formula 2 cars along with a sports car race in support known as the Coppa d’Oro Sport. Sitting on the old stone spectator benches across from the pit area are the leading Italian drivers of that period. From the left, Luigi Villoresi, Alberto Ascari, Piero Taruffi and Giuseppe “Nino” Farina. All four would be driving for Ferrari in the new 500F2 which would be Ferrari’s entry for the year’s World Championship which would be under the F2 regulations.

Practice saw Ascari as easily the fastest with Villoresi and Farina also on the front row of the 3-3-3-3 grid. Taruffi was in the next row and positioned behind Ascari . The other entries, a few older Ferraris and a pair of Maserati 4CLTs cobbled-up  as Maserati-Platés, plus a Lancia were nowhere in terms of competitiveness with the new Ferraris.

At the start Ascari hit some straw bales on the first corner but only lost one place and was soon in the lead. Farina and Taruffi ran most of the race in second and third while Villoresi set the fastest lap, if the official timing is to be believed, a full three seconds better than Ascari’s pole time. He was soon in trouble with a mis-firing motor and was running throughout but failed to be classified as a finisher.

Late in the race Farina, in second, and Taruffi were given a “hold position” signal but perhaps Taruffi decided he did not want to see it and shot past the 1950 World Champion to take second. Farina was probably less than thrilled.

In the sports car race a young Eugenio Castellotti was the easy winner over an otherwise also unimpressive field in a Ferrari 225S owned by the Marzottos, themselves very good Ferrari clients.

← First Time Out
How to Win the Targa Florio →