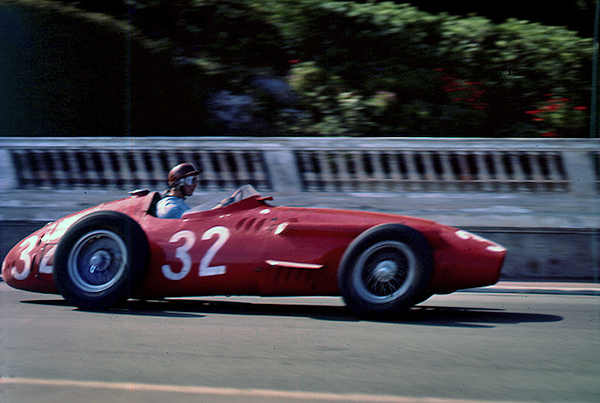 This is an impressively panned photograph of Juan Manuel Fangio in his Maserati 250F during the Monaco Grand Prix on May 19, 1957. Fangio nearly had a perfect weekend. He was fastest in practice so he had pole position, had the fastest lap in the race and led almost the entire race to notch his second win of the year in what would be his fifth and final World Championship. 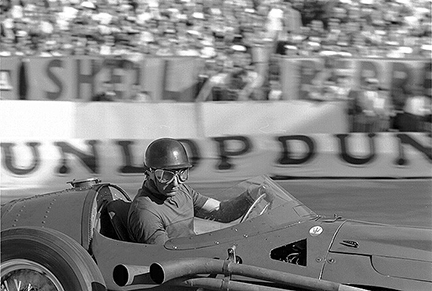 During practice Fangio and team partner Harry Schell both tried a 250F with Maserati’s V12 motor. It was not intended that this car be raced, as it was used only for an assessment in practice. Fangio is seen here at the left at the Gazometer hairpin, the double exhaust pipes on each side identifying the V12 motor. Both drivers thought that the V12 was too “peaky,” especially on the short and tight Monaco street circuit.

The only real competition for Fangio came from Stirling Moss in a Vanwall who led the first four laps before crashing out at the Chicane. The Moss accident also led to the immediate retirement of the two fastest Ferrari-Lancias, driven by Peter Collins and Mike Hawthorn, who just avoided entering the harbor as both their cars ended up on top of the long poles which formed a barrier at the exit to the second part of the Chicane. Somehow, as he had done in a similar event at Tabac Corner at Monaco in 1950, Fangio avoided involvement in this multiple-car crash.

Tony Brooks with the second Vanwall was delayed by the accident but continued on to finish second and on the lead lap behind Fangio. Third was Masten Gregory, two laps down, in his first Grand Prix with a Maserati 250F from Scuderia Centro-Sud. He, too, was a bit fortunate as he had been behind Jack Brabham’s Cooper on his last lap when the Cooper’s fuel pump mount broke, forcing Brabham to push his car to the finish to gain sixth.