An Overtake by the Lake

This image is from the 1957 Mille Miglia. It was taken from the Ferrari 335 Sport, powered by a 4.1 liter motor and driven by Peter Collins and with photographer Louis Klemantaski as his navigator. The route north from Rome passed through Viterbo on the way to the Radicofani pass. Along the way after Viterbo the route passed by the large Lago di Bolsena which can be seen to the right. A man standing to the left is warning Collins about the two much slower competitors jousting for position as the Ferrari closes on them at high speed.

The blue and white Mercedes 200A sedan was crewed by Helmut Ritter and Wolfgang Larcher as they slid wide to overtake the OSCA MT4 of Giuseppe Mongeri and Antonio Barbagallo. Both of these cars would finish, the Mercedes in 57th place and third in the over 2 liter touring class while the OSCA would be classified in 152nd position. Collins and Klemantaski would soon be past these slower cars as they set a pace 10 minutes ahead of the 1955 record achieved by Stirling Moss in a Mercedes-Benz 300SLR. The old adage that he who leads at Rome will never win the Mille Miglia would never be truer as the Collins/Klemantaski Ferrari would retire with rear ale failure at Parma, then well in the lead and only about 80 miles before the finish at Brescia. 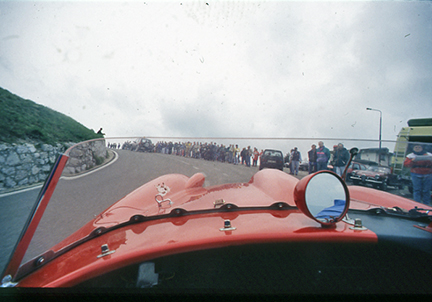 Here is another view very near the same spot when Klemantaski, still taking photographs, rode again as a passenger in the same Ferrari in the Mille Miglia Storica almost 40 years later. This time he arrived at the finish!

Our End of Year Sale continues, although our stock of The Cruel Sport has been sold out. Go to klemcoll.com to see our images in The Gallery where we will give a 40% discount or other books in our Special Publications area.

← The Breadvan
The Lobster Claw →