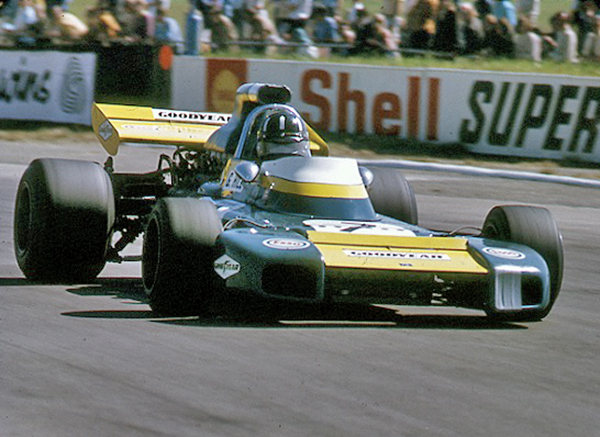 This unusually shaped Formula 1 car was developed by Jack Brabham’s team which was actually called Motor Racing Developments and involved Jack Brabham and his long-time engineer and designer Ron Tauranac. This car, the Brabham BT34, was designed for the 1971 season by Tauranac after Brabham had retired. Graham Hill was signed on as driver as seen here during practice for the British Grand Prix at Silverstone on July 17, 1971. Hill had won the non-Championship International Trophy at Silverstone in May with the BT34 but only qualified 16th for the Grand Prix and was eliminated by a crash at the start with Jackie Oliver’s McLaren. 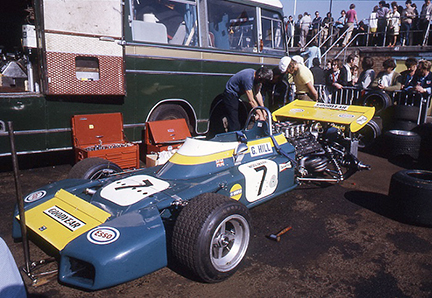 The BT34 was generally similar to other F1 cars of the period except for the radiators which were mounted in two outboard sponsons in front of the front wheels which allowed for an airfoil between them. The visuals of this arrangement resulted in the BT34 being referred to as the Lobster Claw. The front and rear suspensions were conventional in that it was all back out at the wheels, as were the brake assemblies. The usual Cosworth DFV V-8 provided the power driving through a Hewland FG400 transaxle. More detail can be seen at the left in the Silverstone paddock behind the pits.

The BT34 ran in ten Grands Prix in 1971 with the best result being a fifth place in Austria, as well as in four non-Championship races. At the end of the year Bernie Ecclestone took over the team and Tauranac resigned. Hill stayed with the team but no longer drove the BT34. The BT34 was used in 1972 in ten more Grands Prix and one other race with the best results being two seventh places, one by Carlos Reutemann and the other by Wilson Fittipaldi whose family bought the car at the end of the season.

Our End of Year Sale continues. Go to klemcoll.com to see our images in The Gallery where we will give a 40% discount or other books in our Special Publications area.

← An Overtake by the Lake
Alfonso de Portago →