A Ferrari TR at the Targa 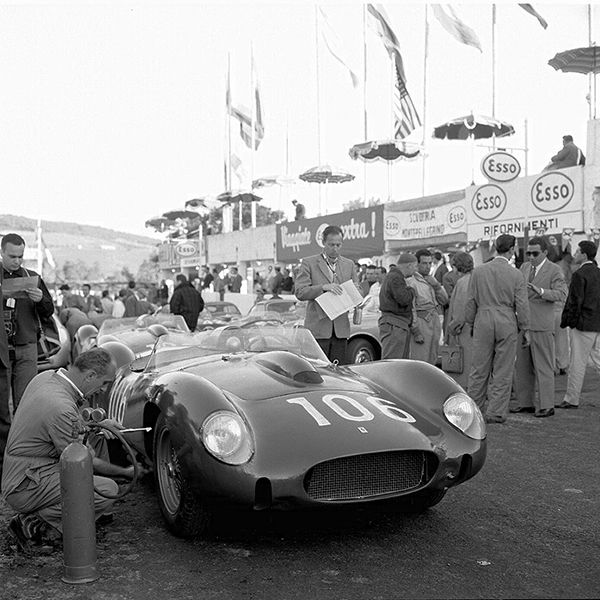 We are here waiting in line for the start of the Targa Florio on May 11, 1958. The car is a Ferrari 250 Testa Rossa entered by Scuderia Ferrari, one of four such cars entered by the factory team. This example will be driven by Luigi Musso and Belgian endurance expert Olivier Gendebien. Two of the other Ferrari entries would be driven by other members of the strong Ferrari team: Wolfgang von Trips / Mike Hawthorn and Peter Collins / Phil Hill. A fourth entry, the older 250TR prototype will be assigned to second stringers Gino Munaron and Wolfgang Seidel.

The cars would start one by one at 40 second intervals beginning at 6:30 in the morning for 14 laps of the 45 mile long Piccolo Madonie 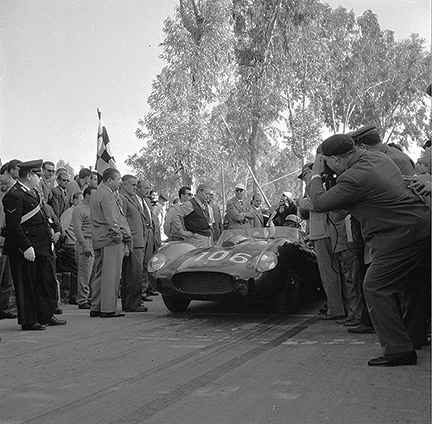 mountain circuit for a total distance of 630 miles. There  would be 38 starters remaining of the 52 entries which had practiced – the rough and dangerous Targa road took no prisoners. Here again is the Musso/Gendebien car with Musso at the wheel waiting for the starting flag. Musso was the last of the entries to start but by the end of the first lap he was in the lead, having recorded the fastest lap so far. Finishing order would be determined by elapsed time, not by road position.

Musso continued to put in strong laps and expanded his lead, especially as other contenders, both from other teams as well as Ferrari, had excursions into the unforgiving countryside or experienced mechanical problems. Stirling Moss with an Aston Martin DBR1/300 was a possible challenger to Musso as he set more than one new lap record before the gearbox of his Aston broke. Gendebien was careful when he took over and made sure that the brakes had recovered from failure resulting from loss of fluid during Musso’s stint. 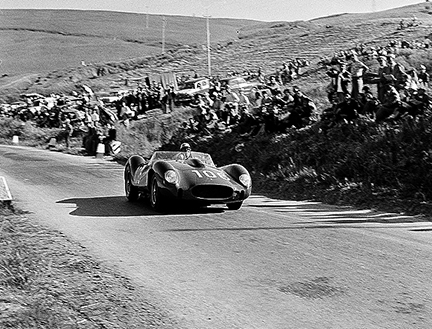 Here is Musso out on the circuit along a less dangerous area running at high speed past the spectators. With his flat out speed and help from Gendebien, Musso carried on to win by about five and a half minutes with the Porsche RSK driven by Jean Behra / Giorgio Scarlatti coming second less than a minute ahead of the Trips / Hawthorn Ferrari.

Go to klemcoll.com to see more of our images in The Gallery at http://www.klemcoll.com/TheGallery.aspx

← On the Isle of Man
A Wet Mille Miglia →