Here we are in Woodcote corner, the very fast final corner on the old Silverstone circuit as Juan Manuel Fangio, assisted by the Ferrari mechanics, pushes is Ferrari-Lancia toward the grid. The race will be the British Grand Prix which took place on July 14, 1956.

Fangio was joined on the Ferrari team by Peter Collins, seen at left with Fangio in the paddock, Eugenio Castellotti and Alfonso de Portago. They would each drive a Ferrari-Lancia, the Lancia D50 Grand Prix cars taken over by Ferrari in mid-1955 which at this point were essentially as received from Lancia with the primary exception that the D50’s side-mounted fuel tanks had now been moved to the tail of the cars in the more usual Ferrari practice. This made the handling less tricky. The Ferrari-Lancias maintained their 2.5 liter V8 motors designed by Vittorio Jano who had  come with the cars to Ferrari, now as a consultant

Fangio would qualify second, behind the Maserati 250F of Stirling Moss while Collins was fourth behind Mike Hawthorn’s BRM P25. Castellotti was eighth while the less experienced Portago was back in twelfth. A fifth Ferrari-Lancia had been brought for Olivier Gendebien but he was no faster in practice than Portago and the 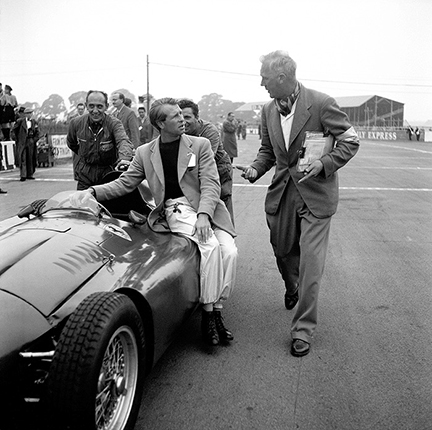 car was withdrawn. Collins, seen at the left on his way to the grid, was slow at the start, running fourth with Fangio just ahead of him. The lead was held by the BRMs before they both retired, with Brooks lucky to escape with light injuries when his BRM had a structural failure, went end for end and caught fire. The Maserati 250Fs of Stirling Moss and Roy Salvadori were both near the front at half distance, but both would retire with transmission and fuel system failures, respectively.

Collins’ car also retired at which point he took over the one started by Portago with the Spaniard relegated to Castellotti’s which was no prize, having to be pushed along to the finish in tenth position, nine laps back. Both the Fangio and now Collins cars showed lots of understeer, due perhaps to the weight of fuel in the tail, but with all the retirements Fangio ended up getting the win with Collins a lap behind in second place. Jean Behra’s Maserati 250F was third, two laps back.

← Felice Bonetto at Bari
A Test at the Aerautodromo →
Join 2,508 other followers