A Champion at Spa 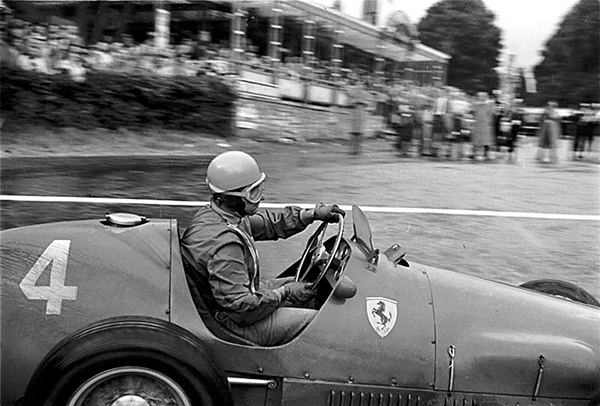 The raised apex of the La Source hairpin was always a favorite spot for photographers during races at Spa-Francorchamps as it allowed for close up photographs of the drivers at work at low speeds on this otherwise super fast circuit. Also, as here, the often wet Spa weather did not involve the massive amounts of spray at this location which was the case elsewhere. Here we see World Champion to be Alberto Ascari rounding La Source  during the Belgian Grand Prix on June 22, 1952. Ascari is driving a Ferrari 500F2 which had a two liter four cylinder motor designed by Aurelio Lampredi. The World Championship was to be decided by F2 cars in 1952 and 1953 after the retirement of the Alfa Romeo team at the end of the 1951 season.

The three Scuderia Ferraris entries totally dominated both                   qualifying and the race with Giuseppe “Nino” Farina and Piero  Taruffi following Ascari in practice a few seconds back. The start of the race gave a bit of a surprise as Jean Behra driving a Gordini shot away into a lead which lasted the first lap just ahead of Ascari and Farina. Taruffi had stalled his engine at the start and got away in ninth place.

Ascari led all then remaining laps. On the left we see a wet Ascari as he pulls in after receiving the checkered flag. Farina finished second but almost two minutes behind Ascari. Robert Manzon came in third in his private Ferrari 500F2.

Our End of Year Sale of prints continues during December. Go to our website for full details.

← Jaguar at the Mille Miglia
Alfa Romeo at Bern →
Join 3,307 other subscribers