Here is Phil Hill at the Monaco Grand Prix on May 14, 1961 charging up the Ste. Devote hill toward Casino Square. At this race Klemantaski was experimenting with what was then called a Press Camera which he had modified to use 120 size film as used in his Rollei. This type of camera could […]

Here is the then well known British driver Bob Gerard pulling into the pits after winning the Ulster Trophy which was run on the Ballyclare open road circuit on August 9, 1947. In the immediate postwar years there were few available private circuits in England and racing on public roads was prohibited. Therefore, racing sometimes […]

Here is Graham Hill in Count Giovanni Volpi’s Ferrari 250TRi/61 braking for Druids Corner on the Brands Hatch Circuit on December 26, 1961. A race meeting at Brands Hatch on Boxing Day, the day after Christmas, was a tradition run by the British Racing & Sports Car Club under their then Secretary and famous race […] 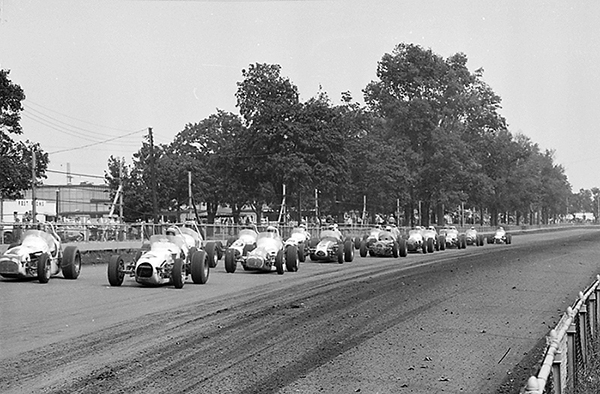 Less than ten miles from Indianapolis, home of the famous “Indy 500,” one finds the Indiana State Fairgrounds, site of an almost equally famous one mile oval which was originally a horse racing track and still held both equine racing as well as events for Sprint and stock cars.. For many years it was the […]

Before the 1957 Mille Miglia

The date is probably May 10, 1957 as the Ferrari team assembles in the factory yard at Maranello before departing for Brescia and scrutineering the next day to be followed by the start of their Mille Miglia on the 12th. The car numbers indicate the starting time of each car. Car n. 534 is a […] 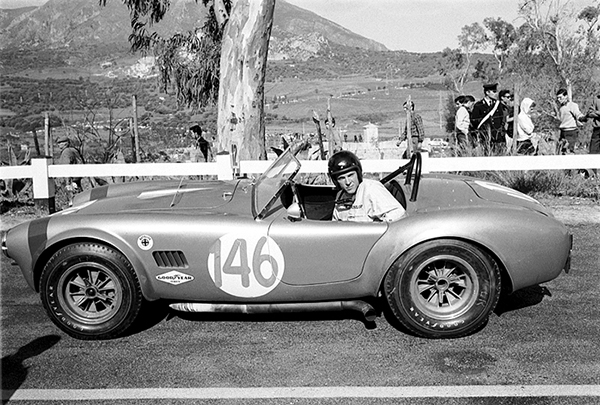 Here is our man Dan Gurney, waiting for practice with the Shelby Cobra at the Targa Florio which took place on April 26, 1964. Gurney was partnered with Jerry Grant and together they finished eighth overall and first in GT over 3 liters. The Shelby American effort involved three other Cobras beyond the Gurney/Grant car. […]

An old friend and often commentator to our points, Jim Sitz, has suggested that we do a post about the Grand Prix held on the Pedrables street circuit in Barcelona on October 24, 1954. Although the Championship had already been decided in favor of Juan Fangio, and this being the last race, Spain was indeed […]

A drivers meeting is rarely a deeply solemn affair, but here just look at the faces… These young men are standing in front of the pits at Spa-Francorchamps before the start of the Belgian Grand Prix on June 14, 1964. Spa was a course that made everyone nervous, especially if it might rain. You did […]

A Lancia at Spa-Francorchamps

Here is a Lancia D50 which will be driven by Eugenio Castellotti in the 1955 Belgian Grand Prix which took place at the famous Spa-Francorchamps road circuit on June 5, 1955. Perhaps the most difficult and often dangerous aspect of racing at Spa-Francorchamps, made all the more so by the very high speed and elevation […]

An Allard in Ulster

Under the threatening skies of Ulster here is Desmond Titterington at the wheel of an Allard J2 on the dangerous Dundrod circuit in Northern Ireland on July 6, 1952. This was a handicap sports car race which was a support race for the more prestigious Ulster Trophy which would take place the next day as […]