Winner of The Mille Miglia 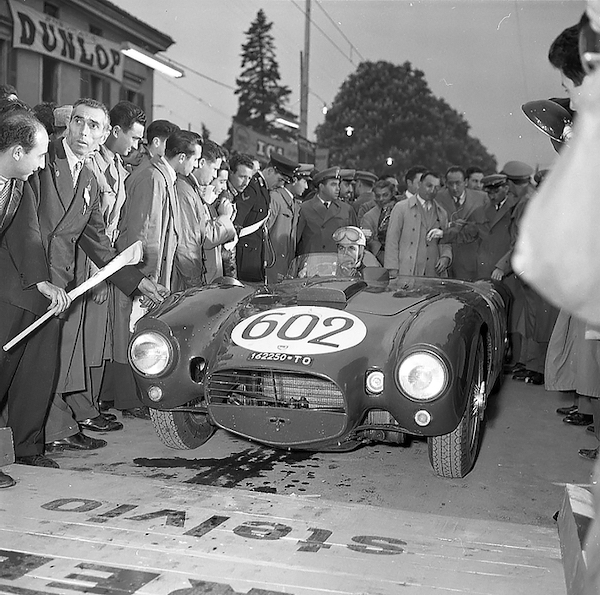 Alberto Ascari sits in his works Lancia D24 just before going up the ramp for his start in the 1954 Mille Miglia. At the end of the 1953 season Ascari and Enzo Ferrari had parted ways, probably because Luigi Villoresi who had become close to Lancia had convinced his pupil Alberto to switch sides for a large financial incentive and drive the new Lancia D50 F1 car. So Ascari would compete in the Mille Miglia for Lancia along with Piero Taruffi, Gino Valenzano and another new signing, Eugenio Castellotti. Although not revered as a sports car driver, Ascari led from the start against strong competition from the Ferraris, both 375MMs and two of the very powerful full five liter 375 Plus. The big Ferraris retired and Ascari, driving conservatively, would win his first Mille Miglia. His time was not as fast as in 1953, due in part to a 14 minute stop at Bologna to repair a broken throttle return spring combined with a full change of tires. Second to Ascari came the first Ferrari, the Scaglietti-created 500 Mondial prototype, actually built on a year-old 625TF chassis, and driven by Vittorio Marzotto.

The Lancia D24 was a development of cars running in 1953, with a multi-tube chassis, a 3.3 liter V6 motor and a rear transaxle with de Dion suspension. It was the creation of the famed Alfa Romeo prewar designer Vittorio Jano. One of the first D24s won the Carrera Panamericana in November of 1953 and then another would finish second at Sebring in March 1954 before Taruffi won the Giro di Sicilia not long before Ascari’s victory in the Mille Miglia. This race and the Lancia victory was the first great challenge to Ferrari in the Mille Miglia which the team from Maranello had won every year since 1948.

Photo from the JJF Archive ©The Klemantaski Collection – http://www.klemcoll.com

We have announced our End of Year Sale with big discounts on our prints and books. For full details please go to http://www.klemcoll.com.