The Magic of Moss

Here is Stirling Moss in a works Aston Martin DBR1/300 during the Nürburgring 1000 Km. sports car race on June 7, 1959. Aston had won this race the prior two years and gave Moss the exactly same car he had used to win in 1958. This photograph was probably taken in the right hand uphill corner area known as Brünnchen. Moss needed a co-driver for this race as each driver would be limited to three hour stints and the race would require some seven and one-half hours. Aston selected the journeyman gentleman driver Jack Fairman, viewed as reliable and conservative albeit nowhere near as fast as Moss, especially on the Nordschliefe with its lap length of approximately 23 km. and 170 corners. In those years the Nordschliefe had no open corners, guard rails or runoff areas, just hedges, bushes and trees.

Moss took the start and built up an immediate lead of 18 seconds at the end of the first lap over his primary competitors, the three Ferrari 250TRs driven by Jean Behra/Tony Brooks, Phil Hill/Olivier Gendebien and Cliff Allison/Dan Gurney. After five laps the Moss Aston was over 47 seconds in front. By his 11th lap Moss had also lowered the sports car lap record by some 11 seconds.

Moss came in to refuel and change tires and Fairman got in, having been given a lead of well over five minutes. Rain now began around the circuit and the Ferraris began to eat into Fairman’s lead at the rate of about 10 seconds each 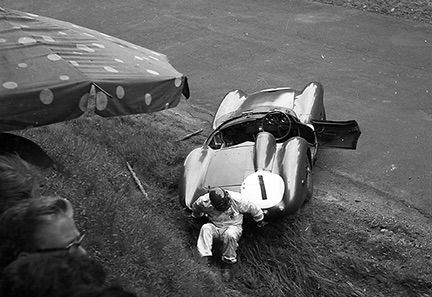 lap. At this point Fairman lost control just before Brünnchen and slid partially into a ditch. If he was to get going again he had to lever the Aston back onto the road by himself as any help from the spectators, seen at the left, would result in disqualification. Fairman might not have been a driver of Moss’ caliber, but he was exceptionally strong and pushed his car back out of the ditch, restarted it and returned to the pits. But the Ferraris of Gendebien and Behra had both gone past.

So Moss would have to regain the lead which he did within a half-dozen laps. But in order to be able to drive the last three hour stint, Moss then handed over to Fairman again providing a lead not far under two minutes. Try as he might Fairman could not hold the Ferraris at bay and Hill passed into the lead after three laps. 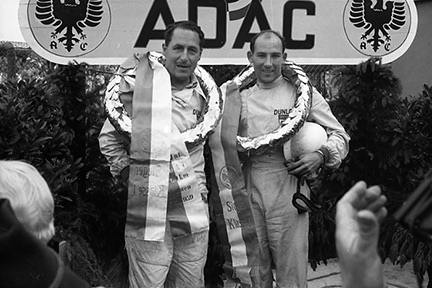 At this point Moss took over again and was back in the lead after four more laps. Moss then ran out to the finish, leading the Hill/Gendebien Ferrari over the finish line by 41 seconds to stand on the podium with his co-driver at he left. It was one of the most impressive racing performances anyone could imagine.

We have announced our End of Year Sale with big discounts on our prints and books. For full details please go to http://www.klemcoll.com.