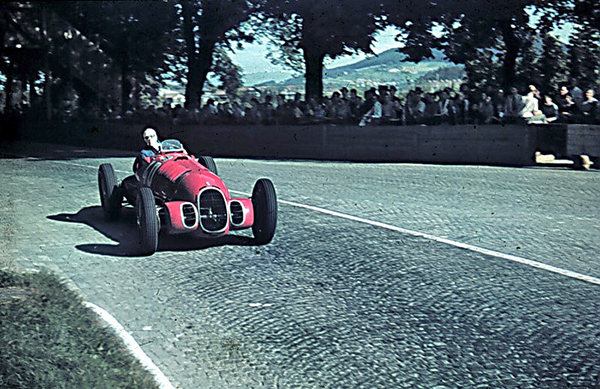 Prewar color racing photographs are very rare. This one was taken during practice for the 1938 Swiss Grand Prix on the Bremgarten circuit in Bern. Not only was 35mm color film difficult to find but obtaining a good image of a moving racing car in color was near impossible with a film speed of ASA 8. Note the paving stone road surface which became very slippery when wet and, in the background, the almost nonexistent spectator protection afforded by a wooden fence.

The driver shown here is Jean-Pierre Wimille in an Alfa Romeo 312, a supercharged three liter V12, entered by the works team Alfa Corse. Nevertheless, the Alfa 312 was at a distinct power disadvantage versus the its Merceds and Auto Union rivals.  Some of this deficit was the due to the far lesser budget that was available to Alfa Corse and another factor was the number of projects in hand. Not only was there the three liter V12, but a the straight eight three liter, a V16 three liter and a 4.5 liter normally aspirated motor, not to mention a major sports car effort.. 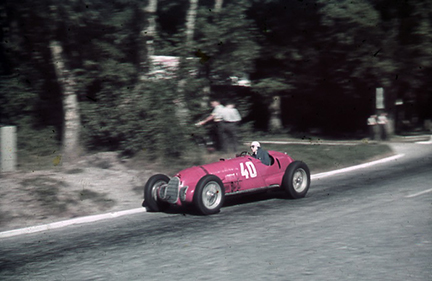 Wimille had been identified with Bugatti with which he had competed since 1930. But with the new three liter Grand Prix formula, Alfa Romeo became an alternative to the German teams and attracted this French ace. At the left is Wimille in a photograph taken from the opposite side of the road. The Alfa relationship continued in the immediate postwar years with Wimille winning several important races and being perhaps the most successful driver of that period.

In practice at Bern Wimille was the “best of the rest” after the Mercedes and Auto Union cars but he was still some 5.5 seconds slower than Richard Seaman’s pole time with a Mercedes W154. Although both the Alfa 312s finished the race, the second car of “Nino” Farina was only fifth and Wimille in seventh, the two Alfa Corse cars split by a private Alfa 308 driven by Piero Taruffi.

Our End of Year 30% Discount Sale continues through December at http://www.klemcoll.com.

← A Champion at Spa
A Personal Memory →
Join 3,307 other subscribers